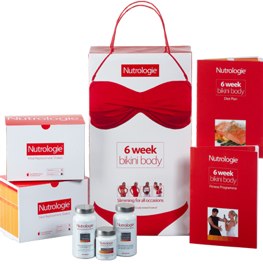 6 Week Bikini Body is a crash dieting system designed for women who want to lose weight fast.  The diet was launched in 2010, by the British company Nutrologie, and quickly became the fastest selling weight loss system in the UK.

As the name suggests, Nutrologie’s product has been created for a specific target consumer group—women who are looking forward to summer, while worrying their bikini body will draw attention for all the wrong reasons. They need to shape up for summer and, if Nutrologie’s marketing is to be believed, the Bikini Diet will help them to achieve this in just six weeks. Nutrologie is an established brand in the UK and sold via Holland and Barrett – the largest independent health and nutrition retailer in the British Isles.

The 5:2 diet is the undoubted most popular diet in circulation. There have been many success stories attributed to it. A product that has been created to work either as a sole diet aid or to coincide with a calories controlled diet is the 5:2 Fast Formula – it is without gimmick and to say that it has been a success is an understatement

What Is The 6 Week Bikini Diet And How Does It Work?

The diet consists of four supplements that work alongside specially designed fitness and diet plans that must be utilized if the desired results are to be achieved.

Quite a lengthy list of ingredients are involved in the production of the four supplements. Not all of them have a proven track record of encouraging weight loss, but many of them do. The ones of key importance are found in the Meta-Lite capsules.

Nutrologie produced an effective, and memorable, TV advert as part of their initial advertising campaign. It features a young lady who is so proud of her new curves she decides to wear her bikini to work.  The advert ends with the statement, “Feel the real you this summer with the 6 Week Bikini Diet.” The advert first appeared on British television in 2010 and the diet continues to thrive on the back of its success.

The 6 Week Bikini Diet website contains four testimonials from satisfied customers. One of them is by a young lady from Manchester, who used the diet to slim down for her wedding and successfully lost 2.3 stone. Independent reviewers also report similar success stories, so overall the response to this diet continues to be positive.

All of the ingredients are natural and there are no known side effects attributed to the use of any of the supplements that form this diet.

As with any diet, however, it is not recommended for use by pregnant or nursing mothers, or those who are taking a prescribed medication.

Anyone who has doubts about their health should, of course, seek medical advice before commencing any new diet or beginning a course of pills or supplements.

The Bottom Line – Is It Recommended

Before embarking on this or any other speed dieting system potential buyers should be aware that the medical fraternity as a whole does not recommend losing more than 2lbs a week, so any crash diet or dieting system can be a cause for concern.

Nutrologie’s 6 Week Bikini Diet, with its unique structure and natural ingredients, could, however, be seen a safer option than many alternative fast weight loss systems.

This diet also comes with a higher price attached to it than many competing diets, but if all aspects of the system are used in the recommended manner—including the workout routines—significant weight loss should be achievable in the stated period of time.

We give it a partial recommendation but others are preferred.

Our preference is for Phen375 – a combination fat burner and appetite suppressant that has received praise industry experts.

A huge customer base and unrivalled repeat order ratio gives u no hesitation in recommending Phen375.

Read why we rate Phen375 so highly