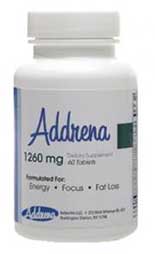 Formerly marketed under the name Adderllin, Addrena is an American supplement designed to mimic the abilities of the drug Adderall.

Although the drug is available as a prescription medication in some countries of the world, the Therapeutic Goods Administration has not sanctioned its use in Australia.

In the countries where it is available, Adderall is often prescribed as a treatment for attention deficit hyperactivity disorder (ADHD). However, it’s performance enhancing abilities and value as a cognitive function enhancer and fat loss aid have caused it to become a highly desirable drug.

However, Adderall is a form of amphetamine, so it can be addictive.

Which fat loss pills are Australia’s best selling – find out

What Kind of Benefits are Addrena Users Told to Expect?

Addrena is marketed as a fat loss pill that provides extra energy and focus.

The Ingredients and Their Potential

Inclusion rates are not provided, but the formulation contains the following key ingredients:

“I’ve been using Addrena for a few months now and usually lose around 8 pounds per bottle. I also find my mind doesn’t wander so easily during heavy revision sessions.”
“I tested this product for a couple of weeks and lost maybe 2 or 3 pounds, but I felt crook and jittery most of the time so it wasn’t a good trade off.”
“I recommend Addrena to anyone who needs to boost their energy levels and mental focus. I’ve only been using them for a month and honesty don’t know how I managed without them.”
“I hoped these pills would help keep me alert in the office and shed a pound or two. They didn’t.”

Reported Side Effects and Other Health Considerations

Many customers claim to have experienced side effects. The most commonly reported ones are:

The Best Place to Buy Addrena

A 30-day money back guarantee is available, but only if no more than 14 tablets have been used.

Addrena is not an overly expensive product, but the guarantee is a joke. The only people who would be able to evaluate the product for a full 30 days would be those taking half the recommended dose.

Some of the ingredients, such as caffeine, bitter orange, and yohimbe, may allow the formulation to provide some degree of fat burning (presuming a sufficient inclusion rate). The same ingredients may also provide the promised energy boost, but some people do not tolerate stimulants well.

This could explain why so many side effects have been reported. On a more positive note, the formulation contains several nootropic ingredients that may help provide the alleged improvements to mental focus, but anyone who wishes to lose weight would surely be far better off choosing a supplement designed solely to boost weight loss.

The formulation is likely to offer the most value as an energy provider and focus booster, but the fact that side effects appear to be so likely means anyone considering using Addrena would be wise to get their doctor’s approval first. 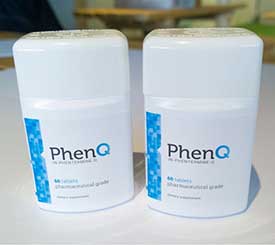 We recommend looking at PhenQ – it is a multi benefit product that focuses on weight loss through fat burning, fat blocking and appetite suppression.

PhenQ can also provide other benefits such as extra energy and an improved mood and mental focus.

Read more on the benefits of PhenQ here