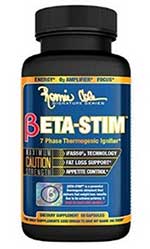 Beta-Stim is part of a range of supplements produced by, former Mr Olympia, Ronnie Coleman. According to the label, it’s a maximum strength “7 phase thermogenic igniter”.

The 7 weight loss phases are:

Beta-Stim has been designed to provide a multifaceted approach to weight loss. If the product works in the intended manner the extra energy it provides should help dieters to avoid the feeling of lethargy that often accompany a calorie controlled diet. It should also help ensure gym-goers have enough go to complete their training sessions. Improved mental focus will probably be of particular use to gym-goers who need to concentrate on the weights in hand, but mood enhancement has a universal appeal and can help dieters forgo the dieting blues. 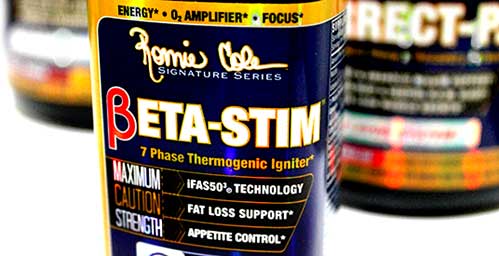 “Thermogenic activators” is just a dynamic-sounding way of referring to fat burning ingredients, and the formulation also contains diuretic ingredients to reduce excess water balance. Losing water from the body can improve muscle definition by making the tissues that cover the muscles less puffy. Losing water will also help tip the scales in the right direction, but the water will return to the tissues quite fast when supplementation is ceased.

The formulation also contains an ingredient that may open up the airways to provide extra oxygen. It theory this could assist the fat burning (oxidtation) process and may improve training capabilities, but most people do not struggle to get enough air into their lungs.

By providing appetite control the formulation may help the user to cut down on calories by eating less, and the “metabolism support” comes courtesy of the formulations alleged abilities to increase the speed at which calories are burned.

The Beta-Stim formulation contains unspecified amounts of the following ingredients:

The lack of inclusion rates makes it impossible to predict how well he formulation may or may not work, but in theory the ingredients used should be able to provide the kind of benefits that are promised. However, there are a lot of ingredients involved, and the capsule size could hardly be compared to that of a horse tablet, so it seems likely that some of the inclusion rates are likely to be extremely low.

However, sticking with the theory side of things; iFAS503 is a patented form of green tea and the catechins it provides have been proven to be effective for speeding the metabolism and encouraging fat burning. Green coffee bean extract also has a good reputation for providing these benefits.

Dandelion root is a potent diuretic of longstanding acclaim. Acacia rigidula is often used in nootropic formulations that are designed to enhance the mood. Adhatoda vasica has no doubt been included to open up the airways, but its reputation in this regard is more to do with hearsay than scientific proof. If the promised energy and focus kicks-in it will probably be largely attributable to the caffeine content, but synephrine is also a stimulant and it has proven fat burning abilities as well.

The blend certainly looks good on paper, but further speculation is pointless without a better idea about the quantities and ratios involved.

How to Take Beta-Stim Capsules – should be taken on an empty stomach and new users are advised to commence supplementation by taking just one capsule per day, at breakfast. If tolerance issues do not arise it is permissible to take a second capsule (5-6 hours later) from day three onwards. If the product continues to be tolerated well users can take two capsules at breakfast followed by one capsule 5-6 hours later, but 3 capsules should never be exceeded in any 24-hour period.

“These pills can make your hunger disappear, will send your energy levels through the roof, and there are no side effects. I only wish I’d tried them sooner.”
“Failed to meet my expectations. I waited for the energy buzz, but it didn’t show. Hoped for the fat burning, but it didn’t show either. Very disappointed.”
“Very good for giving you extra energy before a workout, but it doesn’t take long to develop a tolerance and after that you may as well be popping placebos.”
“A fabulous fat burner that provides a massive energy buzz.“

Beta-Stim is intended for healthy adults who are aged 18-50 and is not suitable for pregnant or nursing mothers. Ronnie Coleman states the capsules are also unsuitable for people who suffer from certain health problems or are taking some forms of medication. He advises anyone who is unsure about their health to seek medical advice prior to commencing supplementation.

Beta-Stim can be purchased from any number of online stores, but Australian customers who wish to forgo paying international shipping charges may find purchasing via Nutrition Warehouse is the best way to go. The Nutrition Warehouse price is $69.95 per bottle. Each bottle contains 60 capsules and should last 20 days when used at the maximum dose of three capsules per day.

Other Diet Pills To Consider

It is our opinion that the commercial diet pill with the highest success rate is PhenQ. 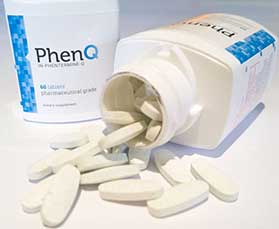 PhenQ is a series diet product without gimmick or hype – it does exactly what it says on the tin. It has multiple weight loss mechanics of action including; fat burning, fat blocking and appetite suppressing.

There is also a long guarantee period, 60 days and free shipping to anywhere in the world – including Australia.