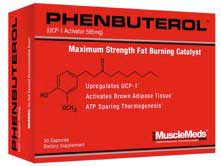 MuscleMeds Performance Technologies describes Phenbuterol as a maximum strength fat burning catalyst. That’s quite an impressive sounding term, but a catalyst is just something that initiates a reaction. All fat burning products are designed to do that. If it was not for the reaction their existence would be pointless.

The company also claims their product enhances the body’s abilities to burn brown adipose (fat) tissue thanks to “a new development in advanced fat burning technology through the activation of Uncoupling Protein 1 (UCP-1)” and trigger thermogenic fat burning. Once again, it’s just an attempt to blind the consumer with science.

Thermogenic fat burning is the effect and the effect is the same no matter how gloriously the triggering process may be described. Having said that, Phenbuterol does contain an interesting ingredient (Grains of Paradise) that has recently been subjected to tests to see if it is an effective fat burner and is not, as yet, being utilized in many supplements.

Of course, one ingredient does not an effective blend make; other things have to be taken into account such as the inclusion rate and the amount and quality of the other blend constituents. Let’s take a look at that now.

Yes, it’s a proprietary blend, and proprietary blends are very useful for manufacturer’s who do not wish to disclose the inclusion rates for their main ingredients. The use of such a blend makes it impossible to predict how the formulation will perform, but let’s see if anything potentially useful—or dangerous—is included.

One capsule should be taken each day.

Extensive online searches failed to turn up an adequate amount of customer feedback, but the little that could be found is surprisingly positive.

“Wonderful product i lost 20 pounds a month with NO exercise, i have already dropped 60 pounds with zero effort along with one of these a day I also use the 3 S No Salt .. No Sugar… No seconds the three s and these capsules let the 20 pounds a month to melt away!”
“This is a great fat burner and it has definitely helped me while dieting. I have had a sustained energy all day when taking this product and it has made cardio that much easier. If you are looking to lose weight this product is awesome.”

Some of the ingredients are known to be problematic, and Advantra Z is of particular concern, so potential Phenbuterol users are advised to discuss the matter with their doctor prior to commencing supplementation.

All Phenbuterol purchases are protected by a money back guarantee, but MuscleMeds fails to state its duration.

Some of the ingredients used in Phenbuterol are known to help initiate the fat burning process, so the blend shows a certain amount of promise, but if the ingredients are not included in sufficient amounts product potential will be severely limited.

Without any inclusion rates to go by the next thing to look at would normally be customer feedback, but in the case of Phenbuterol there is not enough feedback available to provide an adequate insight into product performance.  The possibility of side effects is also too worrying a factor to be ignored. Many alternative blends do not present such worries, and have abilities that are supported goodly amounts of feedback. Phenbuterol does not compare favorably with such products so we are unable to endorse its fat burning abilities or add it to our list of recommended products.

It is possible to buy Phenbuterol from the MuscleMeds website, but the company only ships to addresses located in the USA. The product is also available in many online stores though, so finding a supplier should not be difficult and choosing to buy from a third-party supplier often proves to be the most cost effective option. A box of 30 capsules costs $49.99 when purchased directly from MuscleMeds, but a little shopping around can secure savings of up to $20.

We would recommend Phen375 in the fat burning genre. Phen375 has been available to countries such as Australia, the United States and Canada since 2009 and arguable the most popular and best selling non-prescription fat burner.

Phen375 is formulated under strict international guidelines and also has an impeccable customer service department.

View our in depth review of Phen375 here