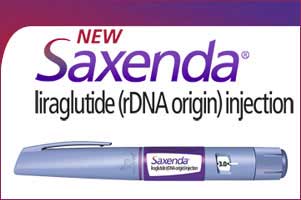 Saxenda (or SkinnyJab as it is being coined in the media) is an injectable weight loss treatment created and distributed by Novo Nordisk.

The Therapeutic Goods Administration (TGA) has sanctioned its use for treating obesity and it’s been available via private doctor’s prescription since December 2015.

The daily Saxenda injections ease the weight loss process by suppressing the appetite. This allows people to reduce their calorie intake without being plagued by hunger pangs.

However, as with other TGA approved prescription weight loss medications, Saxenda has to be used with diet and exercise. This helps ensure the body experiences a calorie shortage that is sufficient to necessitate the burning of fat calories.

What Is In The Formula

The active ingredient is a drug called Liraglutide. It was originally developed as a treatment to help manage diabetes, but when diabetics using the drug began losing weight it was also made available as a weight loss aid. The dose used for weigh loss purposes is higher than that needed for diabetes. 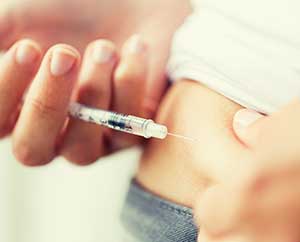 Liraglutide appears to mimic the effects of the GLP-1 hormone created in the intestines. This hormone increases insulin secretion and sensitivity. It also slows acid secretion and gastric emptying.

The knock-on effect of this is the brain receives a message that misleads it into believing the stomach is full. The results of three early studies suggest people using the drug in conjunction with a low calorie meal plan and increased levels of physical activity may lose 2.5 times as much weight.

How to Use – comes in a pre-filled injector pen. Only one injection is required per day and it is important it goes into the skin tissue, avoiding the veins and muscles. The recommended injection areas are the upper arm, waist and thigh. New users will require coaching in the correct way to administer the drug, and the dosage is gradually increased over a 5-week period.

“The actual injection is not so bad. Just a little prick. But my skin gets very itchy afterwards. It’s not nice at all, but usually wears off after an hour or two. I’ve been using this stuff for around 5 weeks now and the total weight loss so far is 28lbs.”
“The injections are a pain and the headaches and dizziness are even worse, but I’m dropping about 4lbs a week so I suppose it may be worthwhile in the end.”
“I’ve been using Saxenda for 6 weeks and it has helped me to lose 18 pounds. That doesn’t seem a lot to me. Especially for such an expensive drug. I also find it an unpleasant product to use. I need to lose weight, but don’t want to be a pincushion to do it. I’m going to try something else instead.”
“My appetite is no longer a problem and I’m finally starting to lose weight, but the injections make me feel very sick and dizzy so I may have to stop.”

Side Effects Of Saxenda

Saxenda’s prescription-only status is not without good reason. The drug can aggravate certain medical conditions and is known to interact badly with some medications. Information provided on the manufacturer’s website also points out use of product entails a possible risk of thyroid tumours. However, this warning is based on the way some rodents reacted to the drug. It may not have this effect on humans.

Some of the common side effects related to Saxenda usage include nausea, vomiting, and changes to bowel movement. More serious side effects include extreme fatigue, shortness of breath, difficulty concentrating, and racing heart beat. Any Saxenda user who experiences serious negative reactions is advised to stop using the drug at once and seek medical advice.

Saxenda is not subsidised by the Pharmaceutical Benefits Scheme (PBS), so it has to be purchased by private prescription at a cost of around $400 per month.

Although the price is daunting, most dieters will not need to concern themselves because they will be unable to get hold of a prescription. Australian law only permits doctors to prescribe the drug to people who have a BMI of 30 or higher. People who have a BMI of 27 to 29 may also be eligible for a prescription if they also suffer from at least one weight-related health problem, such as high cholesterol or type 2 diabetes.

The TGA obviously has faith in the hunger suppressing abilities of Saxenda. If they didn’t it would not have been approved as a prescription only weight loss medication. Many dieters may not relish the idea of sticking a needle in their flesh every day though.

Even more will not have a BMI that is high enough to make them eligible for a prescription, and those who do obtain one are looking at a hefty monthly expense for the duration of the treatment. The side effects the drug presents are also an issue.

Saxenda may be good for weight loss, but some supplements are better and can offer pain-free weight loss without side effects for a fraction of the price. 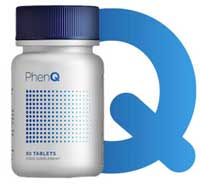